Why Sativa, Indica and Hybrid are terms we need to respect 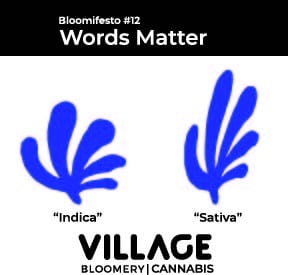 Cannabis in Canada as we know is still emerging into the mainstream since it was “legalized” in 2017. At the Village Bloomery we use quotations when we refer to cannabis  legalization because if there is one thing we understand it is that Cannabis has more laws surrounding it than ever before. Pre legalization cannabis lived in an unregulated “grey” area of the law while today it is a highly regulated substance. That’s a different post that we will come back to later.

Pre-regulation of cannabis the words Sativa, Indica and Hybrid meant something. There were self described cannabis nerds like us who were exploring the realm of terpenes, cannabinoids, flavonoids etc in relation to their medicinal benefits but the general consumer vernacular of the day was based on decades of lore derived from experience. If a flower created a sleepy stone in general it was deemed an Indica aka “In Da Couch”. If the flower left most feeling energetic, focused and uber social it was deemed a Sativa. Hybrid was the word used to describe a flower that felt balanced and creative and for the most part folks asked for a Hybrid when they didn’t want to feel overly intoxicated. All of these experiences were then backed up by pop culture via graphic comics such as The Freak Brothers, films by Cheech and Chong and movies like Pineapple Express.

From a growers perspective the Indica plants genetics came from the Indus Valley in Indica and the understanding was that they grew short and wide with dark foliage and created a high yield while the Sativa whose genetics came from Mexico, Africa, parts of Asia and Hawaii  grew tall, lanky, were  lighter in colour and had smaller yields. The Hybrids were their carefully crafted genetic crosses and this is where genetic diversity got its groove on. The Hybrids were described as Indica or Sativa dominant and in the cases of the OG Kush cuts the nearly 50%-50% strains claimed space. There may be some truth to this but science is quickly dispelling many of the things we “knew” about Cannabis. NOTE: Indigenous peoples have been saying trees communicated with each other forever and it wasn’t until just recently that this was scientifically proven…so we are hesitant to put all of our eggs into the conventional scientific basket. That said, the scientific community has wanted to study Science for a long tie and now that prohibition has lifted we are excited by the work that is taking place.

It is important to know that Cannabis is one of the most widely studied plants in history. Prohibition created a scenario where pharmaceutical companies and larger corporate entities could not invest in large scale studies so all of the smaller scale case studies were hidden from the general public and or discounted because they were not associated with big pharma. Now that the scientific community has been given the green light (albeit it is rumoured to be a very laborious task to get the studies active) laypeople can access Cannabis intel that dives deep. This has its up side as well as its down side. A little bit of intel in the wrong hands can create havoc and too much intel can be intimidating for many. It is the former that the Village is sensitive to.

Once regulation came into effect there was a corporate rush to redefine Cannabis and to “clean it up” so to speak. This meant changing the language of Cannabis, this meant posturing as an expert to gain a competitive advantage and it meant discrediting the unregulated aka Legacy producers. While some of this was well meaning it was too much too soon. Check out Leafly’s attempt to describe the complexity of the plant. It is designed to simplify the language of cannabis but for many it is too abstract.

At the Village we are comfortable with the old and we welcome the new. We recognize that almost every plant we have access to today is a “hybrid” of sorts. We know this to be true because a landrace is a product that comes from its indigenous place. Malawi gold comes from Malawi Africa. It will only be a true representation of itself when grown in and surrounded by the elements in  Malawi. Same goes for a Kush which would have originally come from the Kush Mountain range that spans Afghanistan through Pakistan and beyond. In Canada we will have examples of these cultivars but they will always be genetically different than the original as many have been manipulated to make them more cold hardy and or to make them into auto-flower varieties (meaning they will flower in a controlled period of time in a controlled environment). So given that every plant is a hybrid it is more important to us that we give consumers the tools to express what they enjoy, what they are looking for so that we in turn can do our best to guide them to find that experience.

It is possible for a well known “Indica” to energize a person and it is possible for a classic “Sativa” to produce a sleep response. The reason for that lies somewhere in the essential oils (terpenes) and the cannabinoid ratio of the flower coupled with said flowers’ interaction with the endocannabinoid system of the consumer. It doesn’t serve us to get too deep into the science of the plant when we are working to support a consumer to find their product but it does serve us to use the language the consumer brings to the table. If a person asks for an Indica we take that as a cue. It gives us enough information to ask questions that will lead us closer to a solution. We can ask them to share with us the name of a flower they enjoyed. We can engage them with the smell jars to see what their nose has to say. We can support them to try a product and then follow up with them to see if our guidance was effective. If we were to take away the language that has been accessible to lay people we’d be complicit in the oppression of those whose creativity and work got us to this place. So bring your Indica inspiration to the table and speak to us of your favourite Sativas! We’re here for it.