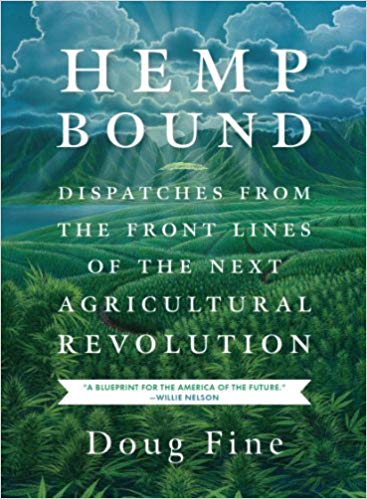 The stat sheet on hemp sounds almost too good to be true: its fibers are among the planet’s strongest, its seed oil the most nutritious, and its potential as an energy source vast and untapped. Its one downside? For nearly a century, it’s been illegal to grow industrial cannabis in the United States-even though Betsy Ross wove the nation’s first flag out of hemp fabric, Thomas Jefferson composed the Declaration of Independence on it, and colonists could pay their taxes with it. But as the prohibition on hemp’s psychoactive cousin winds down, one of humanity’s longest-utilized plants is about to be reincorporated into the American economy. Get ready for the newest billion-dollar industry.

In Hemp Bound: Dispatches from the Front Lines of the Next Agricultural Revolution, bestselling author Doug Fine embarks on a humorous yet rigorous journey to meet the men and women who are testing, researching, and pioneering hemp’s applications for the twenty-first century. From Denver, where Fine hitches a ride in a hemp-powered limo; to Asheville, North Carolina, where carbon-negative hempcrete-insulated houses are sparking a mini housing boom; to Manitoba where he raps his knuckles on the hood of a hemp tractor; and finally to the fields of east Colorado, where practical farmers are looking toward hemp to restore their agricultural economy–Fine learns how eminently possible it is for this misunderstood plant to help us end dependence on fossil fuels, heal farm soils damaged after a century of growing monocultures, and bring even more taxable revenue into the economy than its smokable relative.

Fine’s journey will not only leave you wondering why we ever stopped cultivating this miracle crop, it will fire you up to sow a field of it for yourself, for the nation’s economy, and for the planet.

Doug Fine is a solar-powered goat herder, comedic investigative journalist, and pioneer voice in cannabis/hemp and regenerative farming. He has cultivated hemp in four US states, and his genetics are in five more. He’s an award-winning culture and climate correspondent for NPR, the New York Times, and the Washington Post, among others. His previous books include Hemp Bound, Too High to Fail, Farewell, My Subaru (a Boston Globe bestseller), Not Really an Alaskan Mountain Man, and First Legal Harvest, a monograph that was printed on hemp paper. His print and radio work, United Nations testimony, and TED Talk can be found at dougfine.com, and his social media handle is @organiccowboy.

Your Cart is Empty